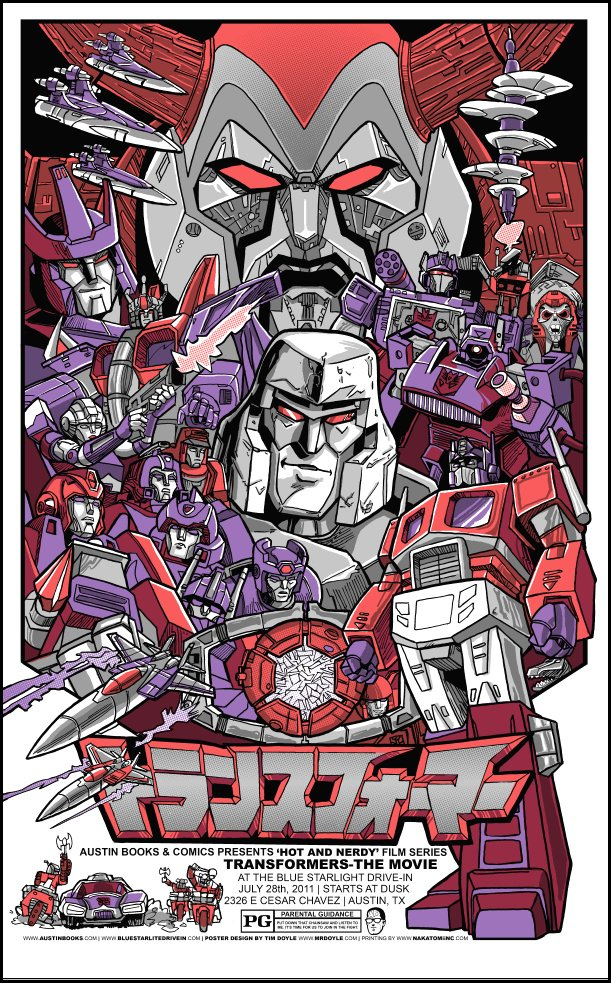 I’m really happy to have been able to do this print.  It feels like I’ve been drawing Tranformers in one way or another for my ENTIRE life. There’s a file full of old Crayon drawings of Optimus Prime in my parent’s house right now.  I loves me some robots.

I am constantly and pleasantly surprised by Hollywood’s restraint in not making a Transformers movie SINCE 1986.  It’s really charming that this great property has been allowed to exist pure and undamaged in the memories of everyone who grew up in the 1980’s.  I mean, can you imagine if they let some dumb-ass lowest-common denominator director dirtbag take a huge dump all over Transformers?  And if they cast some schlub with a face like a foot in the lead, and tried to ‘sex it up’ with some bomb-shell in a crappy tacked on romantic story?

END_OF_DOCUMENT_TOKEN_TO_BE_REPLACED

Look at that freaking line.

Ken Harman, the owner/ operator of Spoke Art was kind enough to fly me and the wife out to San Fran for the weekend for the West Coast debut of Quentin V. Coen. They gave away my Big Lebowski Handbill set, “Sometimes There’s a Man”, to the first 50 attendees, and that did not last long!

The show on Thursday was a blast, and it was really great meeting and talking to everyone who came out. I got to meet a couple of artists at the show, including Greg Gigart, Serge Gay Jr, and Oliver Barret. Let me say one thing, Serge Gay Jr. is a handsome, handsome dude. I will have to steal his powers.

I GET WEIRDER AFTER THE JUMP! CLICK TO READ MORE…

END_OF_DOCUMENT_TOKEN_TO_BE_REPLACED 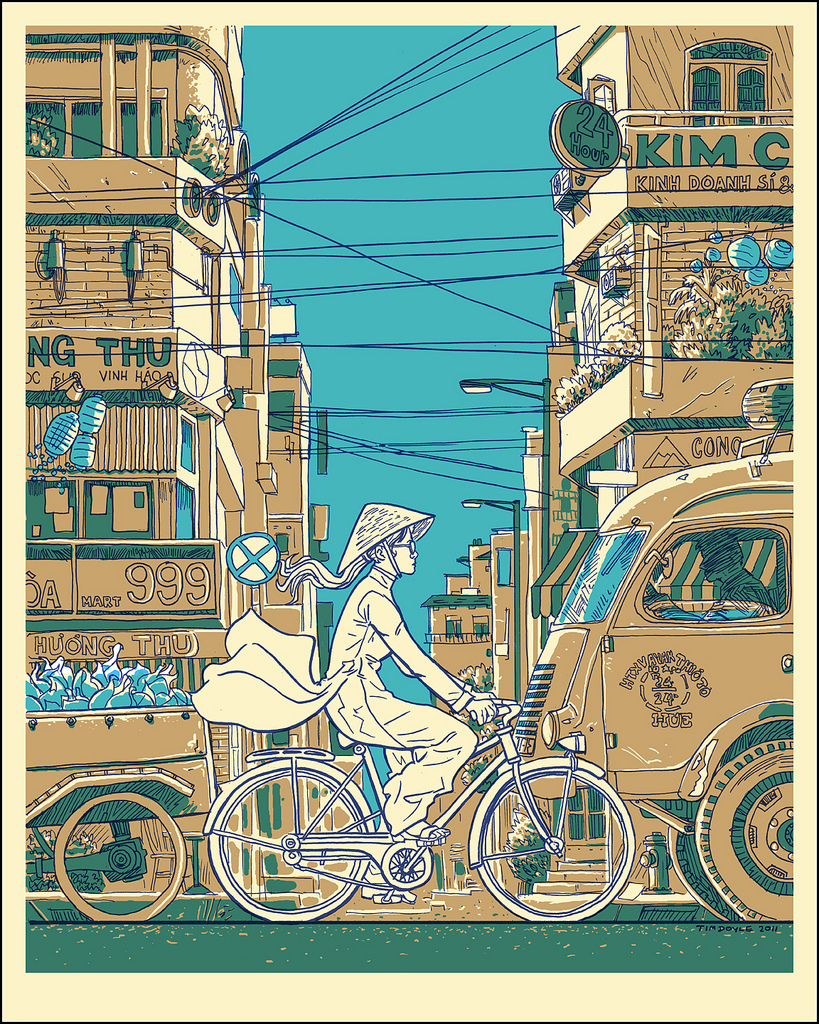 I was asked to participate this year in Poster Cabaret’s annual Bike Print show, and my piece is pictured above!

The gallery opening was on 5/5 at Gallery Black Lagoon here in Austin, and it was a killer show, with over 60 prints by artists from all over the globe.

Poster Cabaret has just listed the show on line, and all prints are now available for purchase.  My print, “Vietnam on Wheels” is a 3 color 16×20 hand printed poster, signed and numbered in an edition of 75.  Poster Cabaret has the entire edition, so if they sell out there, none will be available on my site!

You can pick them up HERE.

Note- this was originally written by me for use on Slashfilm.com, and their coverage of the art show discussed below.  I’m reproducing it here with permission from myself.

The fine folks over at SpokeArt.net have put together a MASSIVE art show celebrating the films of Quentin Tarantino and the Coen Bros. and they’ve asked me to participate.  Since I did five prints for their previous show, a Wes Anderson tribute (called “Bad Dads”), I decided that I had to go even bigger this time around and set out to create SEVEN pieces.  As hard as it was to choose, I went with doing all seven of Tarantino’s features, and leave the Coens aside for now.  A heartbreaking choice, as Raising Arizona is in my top 5 desert island films- along with Pee-Wee’s Big Adventure, Robocop, Blade Runner, and Babe 2: Pig in the City.  (SERIOUSLY.)  But it did give me a chance to re-watch all of Quentin’s films, and see a couple for the first time.  I do realize that ‘having’ to watch movies being a large part of my job is just about the craziest thing that could happen to me, but I digress.

I’ve met and talked to Tarantino several times in the past, having been a manager/ creative type person at the Alamo Drafthouse at my last job.  And let me say, the guy is every bit as energetic and crazed as he appears to be in all those DVD special features.  He is a fanboy in the extreme.  A giant, tall, animated weirdo who will talk over and through you, and you just have to nod and hold on to the conversation for dear life.  In my limited experience, he’s exhausting to be around.  But, it’s that crazy passion and energy that he pours into his work and it comes screaming off the screen at you.  </namedrop>

READ THE REST OF THIS CRAZY BIG ARTICLE AFTER THE JUMP!

END_OF_DOCUMENT_TOKEN_TO_BE_REPLACED

It’s been a while since we’ve had some new T-shirts here at Nakatomi, and we’re super-happy to announce our new line! Based on art from my ‘The Sea Also Rises’ series of prints, these 100% ringspun cotton t-shirts feature BIG BIG printing with machine-washable waterbased inks for that super-soft fit! (No plastic crackly ink!)

Read More After the JUMP!

END_OF_DOCUMENT_TOKEN_TO_BE_REPLACED 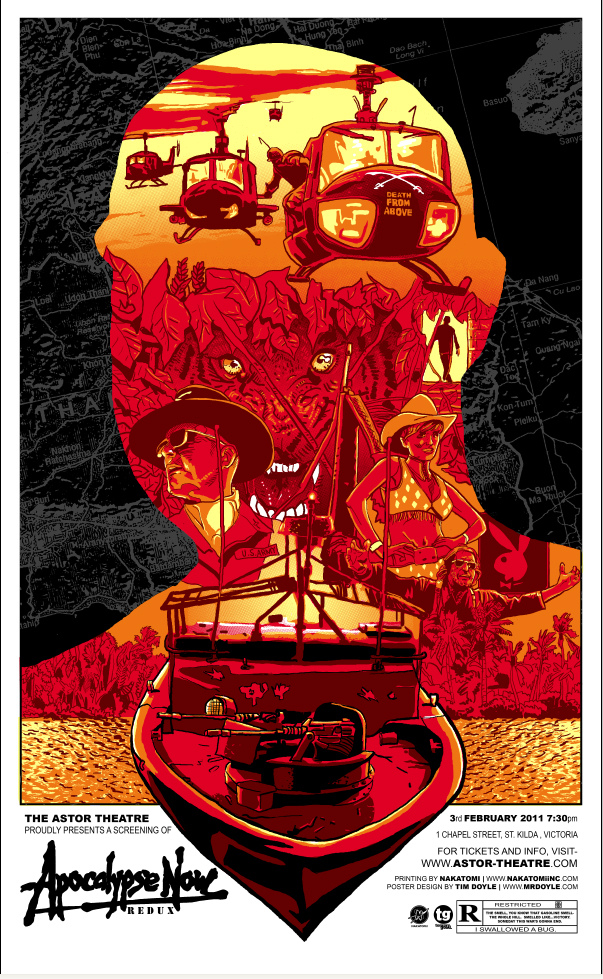 END_OF_DOCUMENT_TOKEN_TO_BE_REPLACED

I was asked to participate in an artshow that is also a fundraiser for a documentary about VHS art, and this is the piece I created for it. VHS will always hold a special place in my memory. I remember my family renting a VCR for birthdays and holidays from the local grocery store, along with some tapes. I always asked for the same tapes: Tron, Temple of Doom, Condorman, Black Hole, and maybe some Transformers cartoons. I used to work at a Suncoast Video when I was about 21, and I remember when DVD’s first came into the store. Here we were sitting in a store full of VHS tapes, with our little section of public-domain-title DVDs that were the first to market. The whole VHS medium was dead and it wouldn’t even know it for another 5 years or so. And now, even the rental culture is almost dead, and DVDs and Blue-ray will be gone in a few years in favor of streaming video. Strange times.

Please read more after the break-

END_OF_DOCUMENT_TOKEN_TO_BE_REPLACED

I was asked to participate in the ‘Black Mirror’ literary/art book coming out in Australia next year. One of the book’s main thrusts is the melding of art and story. Strangely enough, my friend, writer Dave Justus proposed the same idea to me a few months earlier- he’d write a short, evocative passage, and I would create an image based on that writing. So when ‘Black Mirror’ came calling, I saw it as an opportunity to act on it. I liked the idea, as it would push me out of my comfort zone, and force a collaboration of two different disciplines, art and writing. Dave’s poem follows after the jump-

END_OF_DOCUMENT_TOKEN_TO_BE_REPLACED 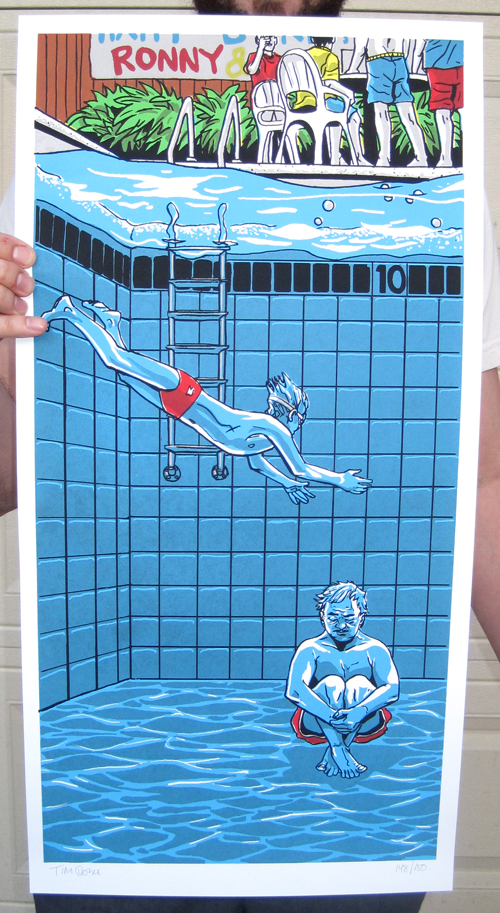 END_OF_DOCUMENT_TOKEN_TO_BE_REPLACED

I was commissioned again to do a poster for an amazing film showing at the Astor Theatre in Australia.  TommyGood.com is the on-line retailer for these, and they just went live on their site on Wednesday.  I will have my copies for sale in a few, but they do still have some left, and I highly suggest you go over there to pick it up, as I don’t have many at all.  This print measures 12×25, with 5 colors, including a gloss overlay for the rain effect, edition of 230.  There is a glow in the dark version as well, limited to 90 copies.

Blade Runner is by far my favorite film, and it was great to visit the imagery again in print format, and this time for an actual screening.

CREEPY SELF-SERVING RAMBLING AFTER THE JUMP!