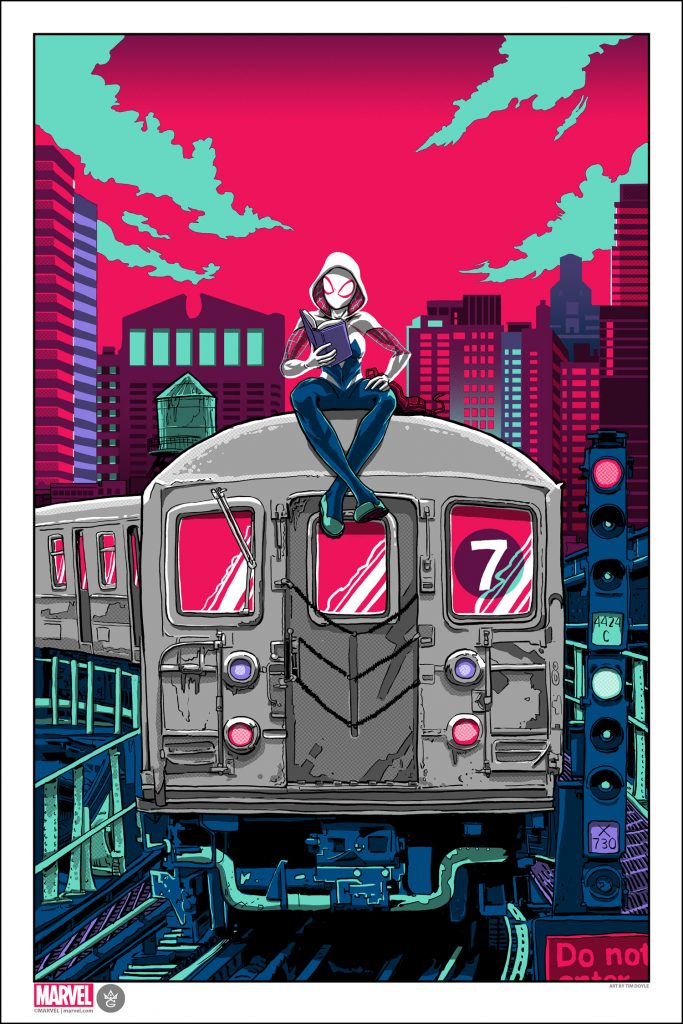 We’ll be at booth #882 near all the other friends of Nakatomi, like SpokeArt, Tom Whalen, and all the rest of the cool kids!

ON TO THE EXCLUSIVES- 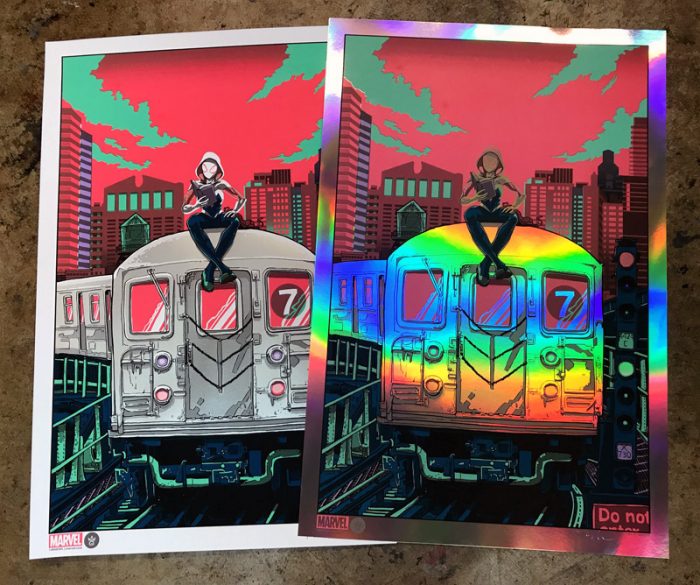 Grey Matter Art commissioned Doyle to produce this official 20×30 screenprint for MARVEL COMICS! Doyle will be at the Grey Matter booth signing on Thursday at 1pm, and this print will first be available there! Available in a regular edition with silver metallic ink, OR a Rainbow-Foil edition! Both signed and numbered. Doyle will have AP copies at the Nakatomi booth AFTER GM releases their copies at 1pm. Swing by and he’ll do a doodle on it for you!

FYI– Doyle will be in attendance for the entire show, so feel free to bring him booze.

See all the other exclusives AFTER THE JUMP! 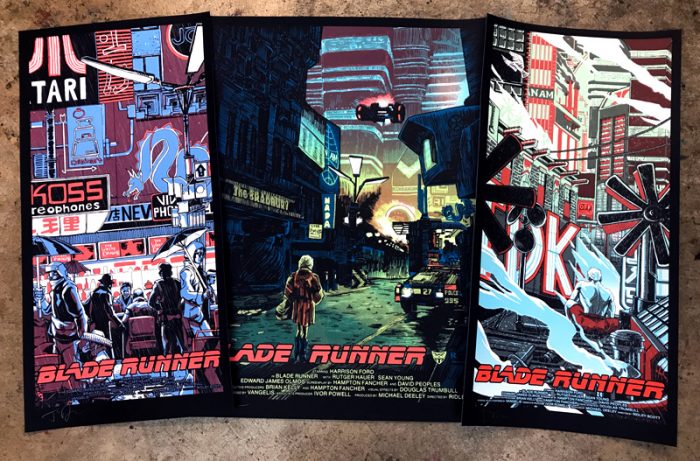 ReelCinemaScreenprints commissioned us to produce our classic Blade Runner inspired prints with titles and credit blocks exclusively for them. They’ll have their copies on sale online later on, but they have the on-line exclusives on these editions- meaning, Nakatomi will not have them for sale, and if you want to get them early and in person, you HAVE to come to our booth to get ’em! All these prints are $30 each.

“White Dragon” and “Tears in the Rain” are 12×24, and “We Scared Each Other Pretty Good” is 18×24. All 3 prints had the artwork retouched a bit, but “Tears in the Rain’ had extensive work done to give it a new feel- check it out- 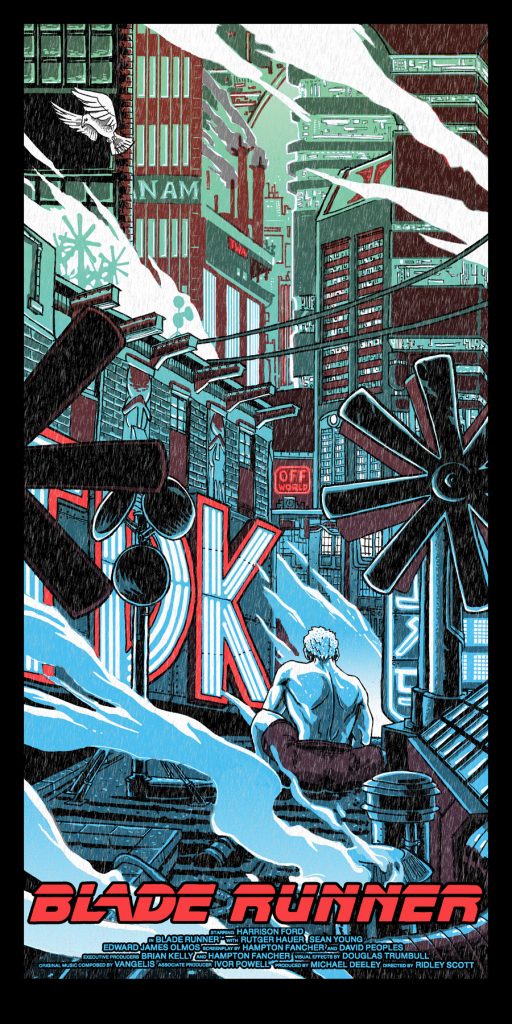 This print was originally done in 2010 (!!!) and Doyle felt like it needed an update- we really like the mood it sets with the split fountain color blend in there! Get it first at NYCC! 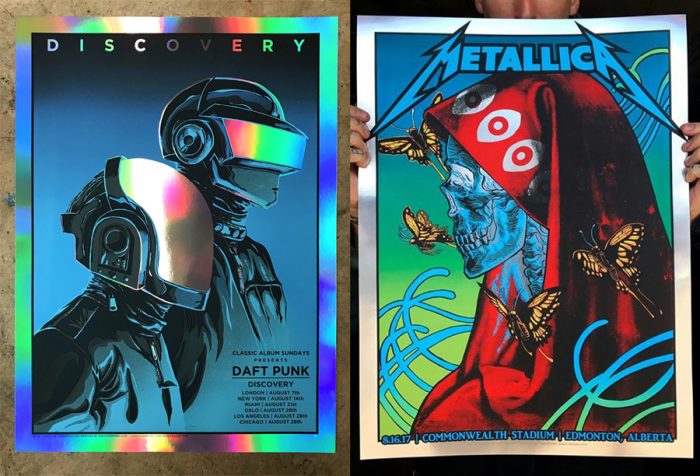 We held back a TINY amount of Doyle’s Metallica and Daft Punk foil variants- and we’ll have the remaining copies available at NYCC. There’s less than 10 total Metallica foils and regular edition going to be present- so if you want one- COME GET IT- We’re only charging the original retail- not crazy eBay prices! 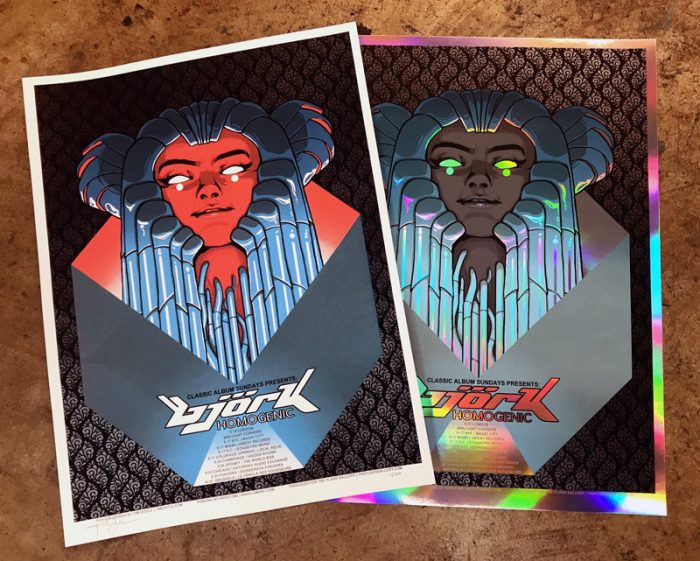 Doyle’s BJORK Homegenic 20th Anniversary poster is also debuting in the US at NYCC- we only have 15! copies of the foil available- when they’re gone, they’re gone! 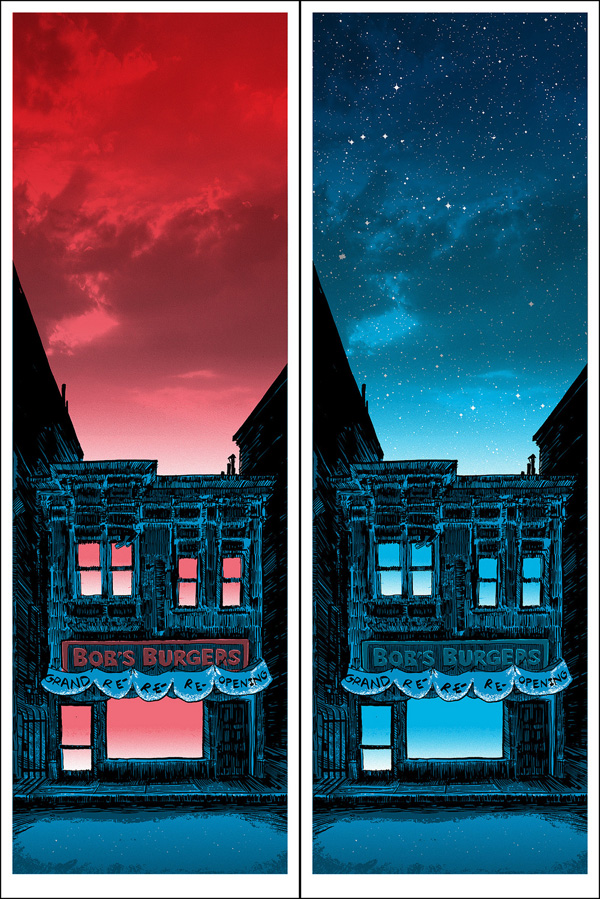 Originally produced for an official Bob’s Burgers event, we have an art-print version that is exclusive to events, and will never be sold on-line! Print measures 12×36, and is signed and numbered in a limited edition! Available in 2 colorways.

GET A FREE ORIGINAL DRAWING!

If you buy a copy of Doyle’s UnReal Estate book ($30)- OR, bring one with you, Doyle will do a free drawing in it! Not just some random chicken scratching, we’re talking a drawn and toned drawing! (note, no portraits, because ain’t nobody’s got time for that, and WHAT THE HELL IS WITH PEOPLE WHO ASK FOR DRAWINGS OF THEIR CHILDREN? DO I LOOK LIKE I WORK AT A THEME PARK?…ahem.)

We’ll only have at most 20 copies of the book per day, so if you want one, come out early and get in the doodle-cue!